Absolutely Free making their way back 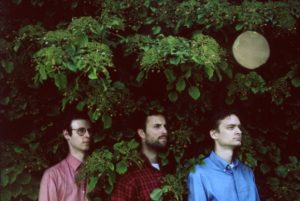 Absolutely Free will be at the Jane Bond in Waterloo Sunday May 28. – Colin Medley

Absolutely Free has been described as many things — from “polyrhythmic berbere stew” to “astro-beat-existential-debris-psychedelic-post-proto-punk-cosmic overlings.”

“Ah. The next album is going to sound very different,” notes AF’s Moshe Rozenberg, one of three multi-instrumentalists in this Toronto-based trinity.

“We are making our way back. The angst and the rebellion are gone,” he notes. “Now there is the ability to embrace the counterculture — the weirdness that we were so into when we were younger — as well as the more satisfying elements that you find in “normalish music.”

Their music is a sonic kaleidoscope — aural flakes of minimalists Philip Glass, Steven Reich, and Harold Budd, with elements of Brian Eno, Frank Zappa, Bjork, The Beatles, and German punk band DAF, seasoned with the reverb electronica of Kraftwerk and hints of a Fela Kuti/Sun Ra dub mix.

Rozenberg’s obsession with All Things Eclectic began when he was very young.

“I was not playing music then,” he recalls. “I was just a kid obsessed with music. I was six or seven years old was when I really started to get into music. I really did not even care what the music it was. I have this strong memory of my family going to the mall and getting a CD player, like a three-disc changer. My sister and I got to choose one each and then my parents chose a CD. They were maybe Green Day, Boyz II Men, and Celine Dion. I remember obsessing over all of those CDs equally. Yes, they really were all equal to me,” he notes with a laugh, “because at that age you are not exactly refining your tastes. I don’t know. I could not tell you what got me into music. I can remember suddenly being obsessed with all things music.

“But for the first CDs I listened to — I am not going to say that they were influences but this was pre-Internet and I was young. It was, what are my options … rock music was an option. R&B is an option. The options were there. I would choose between them so for me it was like listening to normal music.

“Then you get a little older and you start going out to shows and the Internet becomes a thing. You can now go to mp3.com or whatever the hell it is. And dig dig dig,” he says with another laugh.

“As those avenues opened up, music was an alternative option to those things like mainstream music or pop. And for me that was like a point of no return. I just wanted the most challenging music I could find.

“Musicianship was really important to me as teenager; the better you could play your instrument, the more interested I was. But now that is something that I don’t even care about anymore. These days it is more like an idea which is a lot more important than chops. So I went from rebelling so hard against the radio music that I grew up with because there was all of this cooler stuff. I did that in (old band) Newfound Interest in Connecticut and (acclaimed outfit) DD/MM/YYYY (Day Month Year). That was like rebelling so hard against the mainstream — and that stuff was too easy and too obvious. There was this whole world of possibilities; this whole world of other music,” explains Rozenberg noting that this trajectory is more his experience than his AF bandmates.

His dad liked Israeli pop, and his mum liked music from Russian soap operas so Rozenberg did not have the typical parents’ record collection music foundation that a lot of musicians have. There was no musical icon to guide him through his youth like a John Lennon or the late Chris Cornell of Soundgarden.

Rozenberg got into The Beatles when he was 30, unlike his bandmates who still love The Beatles.

He met fellow multi-instrumentalists Matt King and Mike Claxton when he was 16.

The musicians were also part of (notable/now defunct) DD/MM/YYYY. Then they formed Absolutely Free.

The band has also collaborated on commissioned works/remixes with Timber Timbre, (“Hot Dreams”) and Tamara Williamson (Microbunny) on a track called “The Next One” for compilation “Broadcast Music.”

The band has released several DIY EPs including “UFO/Glass Tassle” (2012), “On a Beach/Clothed Woman Sitting” (2013), and self-titled debut release for Arts and Crafts produced by Mike Haliechuk (of Audra) in 2014. They were longlisted for the Polaris Music Prize, and also composed scores for Canadian animation legend Norman McLaren at the Toronto International Film Festival. Absolutely Free participated in a series of multimedia performances in various galleries and live music venues around TO.

In 2016, the band composed the ethereal film score for Toronto filmmakers Melissa Fisher’s and Chris Boni’s indie film “Two Cares Due None.”

And now they are hard at work on their sophomore release also to be produced by Haliechuk.

“We have not even started to record it,” says Rozenberg. “So what we have now is just the material,” he adds. “But when it comes to recording it, it is going to boil down to the ascetics. We are still in the process of establishing an ascetic for it so that is going to set some parameters for sound. But we do not set very many rules for our band so in all likelihood there will be a dozen unfamiliar sounds,” he notes with a laugh. “I could not tell you if we will add any new sounds yet because I am also in suspense!”