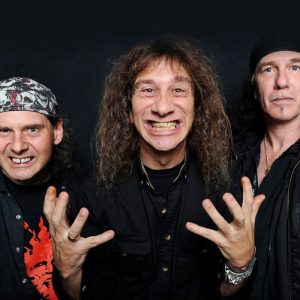 Not too long ago, Canadian metal legends Anvil may have seemed like a band out of time.

The group’s official website, for example, is a fan-run page that hearkens back to the days of the internet’s infancy, and heavy metal’s mainstream heyday is an increasingly distant memory.

In 2009, the documentary, “Anvil: The Story of Anvil,” depicted the band — co-founded by high school buddies Steve (Lips) Kudlow (guitar/vocals) and Robb Reiner (drums) in 1977 — as something of a real-life Spinal Tap, toiling in the obscurity of small bar gigs and mishap-laden European tours while still working menial day jobs, all while chasing an elusive major label deal decades into a career that had seemingly peaked in the early ’80s with the group’s second album, “Metal on Metal.”

As directed by U.K. filmmaker and former Anvil roadie Sacha Gervasi, however, the film is an ultimately uplifting tale that showcases the band’s unpretentious charm and the brotherly bond between Kudlow and Reiner, while including testimonials from members of Guns N’ Roses, Slayer, Anthrax, Metallica, and Motorhead, all of whom consider Anvil their musical peers.

And, like many a great story (including “This Is Spinal Tap”) this one has a happy ending. The film — which is now streaming on Netflix — was a critical smash upon its release, and won the band some long overdue recognition and success, including an opening spot on AC/DC’s world tour and an appearance on “The Tonight Show” with Conan O’Brien, as well as headlining tours of Europe and North America.

The band — whose 17th studio album, “Anvil is Anvil,” was released last year on German label Steamhammer — are headed to South America and Mexico this fall for a series of shows, and their 40th anniversary Canadian tour brings them to Starlight in Waterloo on June 1.

For Kudlow, who was shown in the documentary making deliveries for a school catering company as a way to make ends meet, life in Anvil since the release of the documentary has been a dream come true.

“Well, we’ve lived the sequel, which is amazing,” Kudlow said with a hearty laugh. “The best way to describe it is 100 per cent fulfillment, I guess that’s the best way you could describe it. Everything that I wanted came true, in the sense that I don’t have to do deliveries any more; I’m full-time making a living at being in Anvil, which is all I ever wanted to do. No, I’m not a millionaire, but I’m working on my first million like everybody is.”

Though the film never shies away from the brutal reality of trying to keep a rock and roll band together on an independent budget, Kudlow said the story of Anvil is less a rags-to-redemption tale than it is a story about clear-eyed perseverance against the odds.

“To me, it’s not a story about failure. I mean, if you really think about it, if it was failure, then we wouldn’t have been doing our 13th album (at the time of the documentary). There’s something about that that seems to get overlooked. Yeah, it’s difficult and it has been and it always will be. No matter how big your band gets or where you get, the job is never done,” he said. “I’ve always kept it real, in the sense that I realize what genre of music I’m in, and have lived and adapted to the changes in its popularity.”