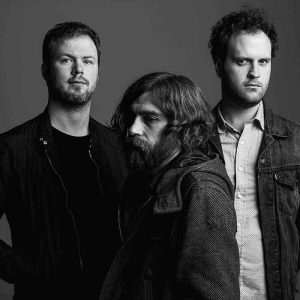 With a name that fits a Nova Scotia-based band rather well, Wintersleep formed in 2001. Initially, they were part of the Nova Scotia label and artists’ collective Dependent Music, which released their first two albums, 2003’s Wintersleep and 2005’s untitled full-length, as the band was just getting rolling. The band graduated to the big time — that is to say the major labels — in 2006, when Wintersleep signed with Labwork, a subsidiary of EMI Canada. Members Paul Murphy (vocals and guitar), Tim D’Eon (guitar and keyboards), Jud Haynes (bass), Jon Samuel (keyboards), and Loel Campbell (drums) were able to see their first two releases get a second look on their new label, complete with bonus tracks, but in 2007 Haynes left the group. A quick replacement was found in Mike Bigelow, and Wintersleep soon delivered their third album, Welcome to the Night Sky which netted them a Juno award in 2008. Riding their newfound success, they returned in 2010 with New Inheritors which reached #12 on the Canadian charts. They continued to push their sonic limits, working with co-producers Dave Fridmann and Tony Doogan on 2012’s acclaimed Ho Human. A late 2015 announcement that they had signed a worldwide deal with Dine Alone Records was followed in early 2016 by the release of their sixth album, The Great Detachment. ~ Chris True & Timothy Monger, Rovi