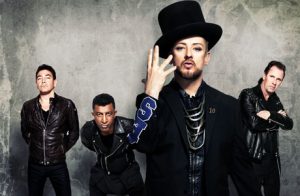 Culture Club were one of the biggest pop bands of the 80s, racking up seven straight Top 10 hits in the UK and nine Top 10 singles in the US. Central to the band’s appeal was the flamboyant front man Boy George, whose cross-dressing and heavy make-up created an image which was completely unique on the pop scene. George was also noted for his biting wit and frequently came up with cutting quips that won Culture Club media exposure on both sides of the Atlantic.