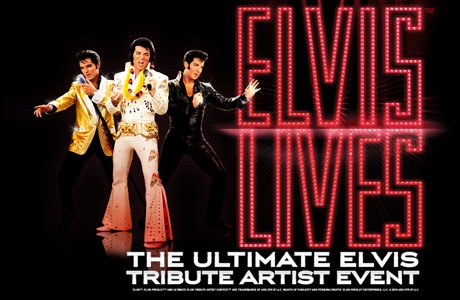 ELVIS LIVES is a journey across Elvis’ life featuring winners and finalists from Elvis Presley Enterprise’s (EPE) annual worldwideUltimate Elvis Tribute Artist Contest™, each representing Elvis during different stages of his career. The tour marks the third time in the production’s six-year history that all three Elvis tribute artists are top winners of the contest. Bill Cherry, Dean Z and Jay Dupuis from 2009, 2013 and 2014 have reunited as the featured touring cast of ELVIS LIVES during the initial leg of the 2017 tour. They will be joined by a live band, back-up singers and dancers, along with an Ann-Margret tribute artist. The upcoming tour will see more songs added to the set list, including “Return to Sender,” “Bossa Nova,” and more. As a co-producer of the tour, Graceland is providing rarely seen restored video and photo assets from its Graceland Archives to enhance the production. The 2017 tour will feature new media direct from Graceland, never before seen on an ELVIS LIVES tour. Fans can expect to see new material and Elvis memorabilia provided by Graceland in the ELVIS LIVES lobby display at each performance.

As an added bonus, every ticket holder will automatically be entered to win a 2 night stay for two to the Graceland Guest House in Memphis, TN – the brand new $70 million hotel; the largest, most expensive hotel to be built in Memphis in over 90 years*.