Harlan Pepper mature beyond their years 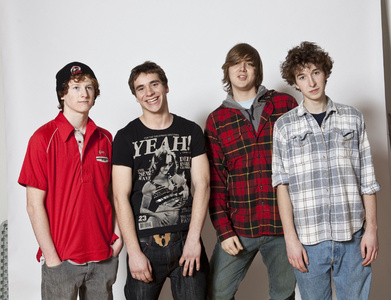 Hamilton roots-rock band Harlan Pepper is getting ready to capitalize on their early success. They’ve recently finished recording their sophomore record (the followup to 2011’s Young & Old — winner of the Hamilton Music Award for Best Roots Recording), and when they haven’t been recording, they’ve been touring. Kitchener fans will get four chances to hear these wise-beyond-their-years gentlemen this April, when Harlan Pepper take on a Thursday night residency at the Boathouse.

“Right now we’re just trying to broaden our fan base,” drummer Marlon Nicholle told me. “We really want to be able to go to Toronto, or Kitchener, or London, or places around and say that ‘Harlan Pepper’s having a show!’ and have people get really psyched about it. It’s coming along. We’re playing more and more. We’re hoping to bring out the record by the summer. Maybe the fall. But we’re really just trying to broaden the appeal for it right now.”

Cut in Nashville (the Music City), recording their second album took Nicholle and his bandmates (Dan Edmonds — banjo, keys, vocals, Jimmy Hayes — guitar / harmonica, and Thompson Wilson — bass vocals), out of their beloved Hamilton and their comfort zone. For the longtime country music fans, the historic surroundings were especially inspiring.

“It was incredible!” Nicholle said. “The experience alone, of going to a city like that … well, obviously it’s Music City. The experience was great. We got to go to Studio B where (Bob Dylan’s) Nashville Skyline was recorded, and a lot of Johnny Cash albums and stuff, so that was really cool. We also go to work with Colin Linden, who produced the album. Working with a guy of his stature was really humbling and just a great experience.”

Producer Linden is an avowed fan of the band. His encyclopedic knowledge of roots music — not to mention his impressive and sprawling producer’s resume — made him an excellent fit when it came time to guide the young men in their search for old sounds.

“(Linden)’s in Blackie & The Rodeo Kings, with Tom Wilson, who is our bass player, Thompson’s, father,” Nicholle explained. “That was kind of how that connection came about. But Colin, he really dug our music and our style and really liked that we had an older sound. That’s what he really likes to see in younger bands: the new generation coming out and trying to bring back that old side of stuff. He really just picked up on that. We were all on the same page and he was really excited to do it. And of course we couldn’t pass that up.”

Scarcely out of their teens, Harlan Pepper’s music has always been somewhat at odds with their age. Their tasteful, artful playing; breezy, country-pop melodies; and weary, knowing lyrics belong more in the realm of men who’ve lived a little more life. Really, though, Harlan Pepper just have good taste. And good fathers.

“I think we’re definitely feeling the ‘old’ vibes,” Nicholle laughed. “My dad, actually, he was the one who kinda taught us all how to play our instruments. We all had our own personal tastes and stuff but he was the one who really pushed the old school music on us, like Bob Dylan, Harry Nilsson, and Neil Young. All those guys. That was kinda when we all really started to fall in love with that music and channelling it into what we were making our music about. That’s how we started.”

Like most young men though, the knowledge of their elders wasn’t exactly absorbed without some trepidation.

“It was more of a forcing,” he said, laughing, “rather than he was turning us on to it. At first we were all like “Oh man what is this? ‘Everybody’s Talkin’? What’s that all about?” But the more we really listened to it and actually got to play the songs, we just fell in love with that 1-4-5 country stuff. And that’s our scene nowadays.”

WHEN: Thursdays in April