Music as “Disruption” is Something You Do, Not Just Talk About 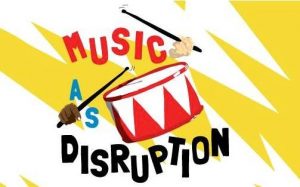 Music As Disruption, a panel discussion at the Gladstone Hotel on Sunday afternoon, March 5, opened with a spirited performance by LAL. Within minutes, the duo got the audience out of their chairs and swaying along to Rosina Kazi’s impassioned urging to “Tear these walls down / Tear some of these condos down.”

If nothing else, it made the point right off the top that “disruption” is something you do more than something you talk about doing. But despite City Hall’s involvement in co-hosting the discussion along with Wavelength – evinced by the participation of Councillor Josh Colle, co-chair of the Toronto Music Advisory Council, as a co-panelist – the city can’t do much more than listen and take notes.

Musicians April Aliermo and John Caffery, scholar Keita Demming, and moderator Sally Lee, sharing a wealth of knowledge and experience between them, joined Councillor Colle, but many question-asking attendees were looking for Colle’s attention. While he was engaging and compassionate in addressing their concerns about venue problems, equity and access to support, it’s clear that disruption of the status quo cannot come from City Hall itself.

“We can only respond and react to what people are telling us,” Colle reminded us. He stressed the need for active intervention of locals with city council while acknowledging that there are many ways he and the city can help to empower the community’s part in that dialogue.

This concept of active citizenship became the foundation of the discussion. Dr. Demming observed that the idea of being a citizen is in need of revitalization and requires thinking critically about the health of the community at large and how power flows through it. Aliermo talked about how too much activism falls to women and people of colour, who historically have had proportionately less power in the art world and beyond. Caffery argued that those with easy access to power (often cisgendered, white, middle-class and male) must do more to advocate for the less visible and less empowered members of their communities.

It was worthwhile ground gained on a topic that felt hard to pin down, part of a larger conversation for which there is a lot of enthusiasm within the music scene at the moment. If you’re a fan of panel discussions, NOW’s own upcoming event, How To Keep A Music Venue Open (And Successful) In Toronto, a follow-up to last week’s cover story, happens Monday (March 13) at the Centre for Social Innovation (192 Spadina). RSVP at nowtickets.ca.