Pete Seeger, a rail-thin, banjo-picking troubadour who sang for migrant workers, college students and star-struck presidents in a career that spanned seven decades, has died. He was 94. 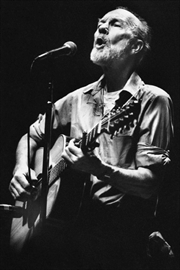 Seeger’s grandson, Kitama Cahill-Jackson, said he died peacefully in his sleep at New York Presbyterian Hospital, where he had been for six days.

Seeger remained active almost until the end, marching in the Occupy Wall Street protest of 2011 and singing Woody Guthrie’s This Land Is Your Land with Bruce Springsteen in 2009 in the Obama inauguration.

“My job is to show folks there’s a lot of good music in this world and, if used right, it may help to save the planet,” he said in 2009.

He brought his well-worn banjo and 12-string guitar to perform in Toronto at Hugh’s Room in July 2008 with his grandson Tao Rodriguez-Seeger and Guy Davis.

Seeger grew up around music. His father was a musicologist and his mother a concert violinist. When his father remarried, it was to a composer.

Seeger planned for a time to become a journalist but dropped out of Harvard University after two years and began spending his time with blue legend Huddie Ledbetter, better knows as “Lead Belly,” and Guthrie.

Although he left journalism, he remained a storyteller.

“The key to the future of the world is finding optimistic stories and letting them be known,” he once said.

He adopted some of Guthrie’s style and lifestyle, hitchhiking and hopping freight trains and learning the music of rural people.

“I liked the strident vocal tone of the singers, the vigorous dancing,” he said in David Dunaway’s biography How Can I Keep from Singing. “The words of the songs had all the meat of life in them. Their humour had a bite, it was not trivial. Their tragedy was real, not sentimental.”

With his lanky frame and full white beard, Seeger was an iconic figure in folk music who outlived his peers.

Bob Dylan called him “a saint” and Springsteen called him “a living archive of America’s music and conscience, a testament of the power and song and culture to nudge history along.”

He wrote or co-wrote such tunes as If I Had a Hammer, Turn, Turn, Turn, Where Have All the Flowers Gone andKisses Sweeter Than Wine.

He lent his voice against everything from Hitler to nuclear power and walked through Manhattan leading an Occupy Movement protest in 2011.

With The Weavers, a quartet organized in 1948, Seeger helped set the stage for a folk revival in the U.S.

Television gigs dried up after the red scare of the 1950s. Seeger entered the Rock and Roll Hall of Fame in 1996 as an early influence and was a 2014 Grammy Awards nominee in the Best Spoken Word category.

He was a founder of the Newport Folk Festival and felt betrayed when a 24-year-old Dylan appeared onstage in 1965 with an electric guitar. There were reports that Seeger attempted to cut Dylan’s power off with an axe, but a festival organizer said this wasn’t true.

In 1955 he was subpoenaed by the House Un-American Activities Committee, where he refused to answer any questions about his associations, philosophical, religious or political beliefs or voting record.

“I think these are very improper questions for any American to be asked, especially under such compulsion as this,” he testified.

He did offer to sing for the committee, who balked at his request.

He was sentenced to a year in prison for contempt of Congress, but an appeals court overturned the conviction.