The Royal Streets Grow Up 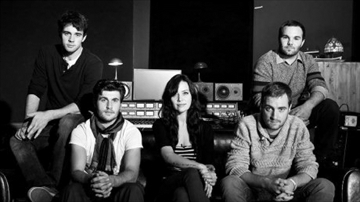 Waterloo folk-rock band The Royal Streets are ready to get their young career off the ground.

The quintet (singer-guitarist Algernon Friolet, guitarist Michael Demsey, singer Jillian Dowding¸ guitarist Eric Stirtzinger, and drummer Samuel Keating) grew up together in high school. They went their separate ways upon graduating, but were drawn back together when Friolet needed some assistance with his growing cache of songs.

“Al had some songs that he wanted help recording,” guitarist Demsey told me, “and I’d sort of gained some minor recording skills when I was away at school, just messing around in my dorm room and stuff. So I helped him record a couple songs and we started writing together. We got Jill involved because we heard a female voice in the whole thing. Eric was up in Ottawa and he wanted to get in on the fun, so he’s taken a couple of years off school to join the project.”

Though their commitment was strong from the get-go, there was also a definite learning curve. The young group basically learned how to be a band from scratch, eagerly embracing the mistakes and mis-steps that would eventually make them a real group.

“We’ve done two EPs,” Demsey explained. “The first one we put out in May 2013. We just recorded it all ourselves. My dad has a metal fabricating shop in Waterloo and he had an empty office in the back and so we made a little homemade studio in there and learned by trial-and-error pretty much. Just messin’ around with mics and sounds and looking up how to record on the internet. The second EP we did in the same place, our little homemade studio, but we had one of our friends engineer it and we definitely got a better sound. But we had a lot of fun messing around before going into a studio like Catherine North.”

Catherine North, the open-concept century-old converted church in Hamilton, Ontario, has a reputation for greatness. Originally run by Hamilton guitar legend, the late-great Dan Achen, Catherine North has produced landmark albums by the likes of City & Colour, Martin Tielli, Whitehorse, and Kitchener’s own long-gone champs, the Miniatures. For the Royal Streets, being invited beneath those high, hallowed ceilings was a dream come true.

“Dan Hosh, who’s now one of the co-owners of the studio, reached out to us last May, just before we were about to go on our first eastern Canadian tour. He expressed some interest in working with us and he gave us a tour of the studio when we were in Hamilton and we instantly fell in love with the place. And we really clicked with Dan, which was one of the biggest things; we really trusted him from day one with the project. It’s been a pretty cool process, getting to know him and being in a real studio and stuff.

“I guess (Hosh) really specializes in folk rock, and when he heard our stuff, it was just home recordings, really stripped down, a couple of acoustic guitars, and I guess he pictured it the same way we did: adding percussion and more electric guitars and just a larger sound. We kind of all agreed that our original sound was good, but it could be better if we added more to it.”

Taking their cues from the Lumineers, John Mayer, and Jack Johnson, the Royal Streets’ buoyant sing-a-longs gain some much-needed heft with the additional production flourishes, and particularly the addition of drummer Keating. Friolet and Dowding’s voices rumble and soar and casually turn pretty songs into gliding anthems.

“Our new record has a full drum kit; even though it’s still based around the acoustic structure and the chords, we just made it all a little bit louder and a little more fun. It’s kinda refreshing to get back to that stripped down, rootsy music. I think we’re doing it at the right time. I think it’ll do pretty well.”