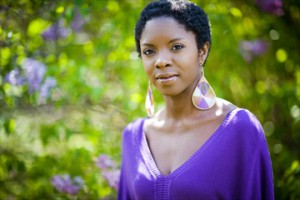 As a child, Joni NehRita remembers how her mother infused in her a deep love of the arts.

“She wasn’t a musician but she loved the arts,” said the 37-year-old jazz and soul singer, who debuts with the Kitchener-Waterloo Symphony this weekend in Ray Charles — A Tribute.The singer’s mother exposed her young daughter to all elements of the arts: Shakespeare in the Park, art galleries and concerts. At home they listened to a wide variety of music, including country, gospel, Christian and pop, but it would be Motown that really resonated with NehRita.

Raised in Etobicoke, NehRita’s parents were both immigrants from Jamaica. Her father had been married previously and this second marriage, to her mother, would only last a few years. NehRita has four stepbrothers.
“I grew up with my mom,” the Guelph singer said. “When I was six or eight, she was putting herself through college, DeVry computer science, and she was working.”
Such a busy schedule meant NehRita spent time on her own, time she often used to listen to music. As a teenager, attending West Humber Collegiate, NehRita was the odd girl out, the only kid in school who was really interested in music. At the time, the school didn’t have a music program.
“I was a bit of an oddball,” she said. “Everyone was into other stuff. There was nobody that was musical around me.”
And her parents were not exactly on board with the idea of her pursuing a career in music.
“Neither of my parents were particularly thrilled. I went to university for one year, took arts. I thought I could become a teacher. I was still taking vocal lessons.”
After one year, NehRita knew she was in the wrong program, dropped out and applied at Humber College’s jazz program. The first day at the school was enough to convince her that she made the right choice.
“I thought ‘these are my people,'” she recalls. “There was a guy on trombone, a girl killing it on the piano.”
After graduating, she worked in Toronto for more than a decade, moved to Montreal for a year and a half and, upon returning to Toronto, experienced a shift. The city felt claustrophobic, all grey buildings and sidewalks, not enough green.
Then friends invited her to Guelph’s Hillside Festival. Again, she suddenly felt like she belonged.
“I was looking for somewhere calm,” she said. She also liked the earthy, back-to-nature vibe of the city. “I’m a bit of a hippy.”
The city was musically progressive. She liked that, particularly given she was keen to explore and develop her own style, write her own music.
“I was thinking, ‘I’ve found my place.'”
She taught for a few years at a couple of music schools until her performance schedule with her jazz quartet became too hectic. Unwilling to give up her work with youth, she directs and arranges music for Guelph Glee’s children, teens and adult choirs at the Guelph Youth Music Centre.
The symphony gig came about when conductor Matt Catingub asked the symphony’s principal trumpet, Larry Larson, if he knew anyone who could sing renditions of Ray Charles’ music.
Larson suggested NehRita, and though she had performed back-up with orchestras before, this will be her first opportunity as the star soloist. Whatever nervousness she might have felt eased when she chatted with Catingub.
“Matt did give me licence to feel free to make the songs my own.’Do what you want to do,’ he said. That was good to hear.”
Catingub is a regular guest conductor in the symphony’s pops series. For this performance he arranged the music and will also sing and play piano. They will be joined by two-time Grammy award nominee drummer Steve Moretti.