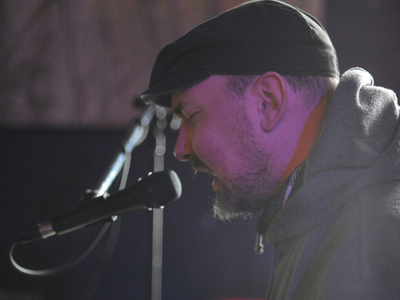 The clerk at the Greyhound station in downtown Toronto assured Fauth everything was OK. That bus he was about to take was indeed an express run to Kitchener. Turns out that clerk was wrong.

But the hometown fans gathered at the Boathouse in Victoria Park for Fauth’s weekly Friday afternoon gig are always supportive. Fauth was greeted with a round of applause when he walked in 30 minutes late. Boathouse operator Kevin Doyle put a shot in Fauth’s hand, they clinked glasses and tossed backed the drinks.

Fauth headed for the piano and started his set with Ain’t Nobody’s Business. That was written in the 1920s by the piano player Porter Grainger, who accompanied the legendary Bessie Smith.

The musical tour of old, old blues/jazz with a contemporary spin had begun.

The performance is vintage Fauth. Few, if any, Canadian blues artists are as steeped in the past. Long years of musical tradition roll off this young artists’ shoulders. His fingers lead the audience on a musical tour that covers more than 80 years.

When Fauth does the Calloway number Minnie the Moocher, he gets the audience singing the refrain Hi-dee-Hi-dee-Hi-dee-High. Calloway made this line famous when he was leading a band at the Savoy Ballroom in Harlem in 1929.

While growing up in Kitchener, Fauth learned the blues from one of the best — the late Mel Brown. In 2006, he released Songs of Vice and Sorrow, in 2008 his CD Ramblin’ Son won a Juno Award and last year Treat a Stranger Right received wide critical acclaim and strong sales.

You would never know this from talking to Fauth, who is always soft spoken and humble. The first words he speaks at this gig are an apology and explanation for being late.

Friday afternoons at the Boathouse are Fauth’s first, regular hometown gig in years. Local fans are lucky to see him regularly.

“I love the Boathouse, I have always loved playing there. The new piano is great. It is a Heintzman,” Fauth says.

“That’s a really good brand of piano that I like playing because it is easy to play, I like the tone and all the keys still work,” Fauth says with a quick laugh.

The old piano at the Boathouse now sits on the patio. For years it could not hold a tune. When Fauth played there last fall and this winter, he brought his own keyboards. But with the Heintzman the old music sounds even more authentic.

“Mostly the sound I like best is acoustic, and I think you can hear the instruments best when they are sort of closest to the natural state to the way they are built to sound,” Fauth says.

The Toronto-based Fauth is busy.

Every Saturday and Sunday he does a brunch gig, 12 p.m. to 3 p.m., at Axis in the Junction neighbourhood in West Toronto. On Tuesdays, 5 to 8 p.m., he’s at Sauce on the Danforth. And later on Tuesday nights, Fauth at Gate 403 on Roncesvalles Avenue. On Thursdays, 3 to 6 p.m., you can catch him at Graffiti’s Bar and Grill in Kensington Market.

It’s a busy schedule and he normally takes only Monday nights off work. Next month he will be in British Columbia for a couple of weeks and will miss a couple of his Boathouse gigs. Last month he was in the recording studio in Toronto with two legends — Jack de Keyzer and Harmonica Shaw out of Detroit. The CD will be released later this year. It is the second time Julian has recorded with them.

This is the second CD Fauth has cut with Jack and Harmonica Shaw.

“He has a way of doing songs that is pretty traditional,” says Fauth. “He picks a topic and has some ideas, and then he sings it more or less as he feels it at the moment. So if you do a second take of the song it could be completely different.”

During almost every show Fauth will play at least one song by Fats Waller, one of the most famous of the Harlem Stride piano players. It is an illustrious musical lineage running from one of the most important centres of African American culture to the shores of Victoria Lake in downtown Kitchener, and Fauth is the conduit.

Harlem Stride was developed by James P. Johnson. Fats Waller and Willie The Lion Smith carried it on. One of The Lion’s students — Duke Ellington — became a household name.

“Proper stride is pretty difficult because you have to jump around and still hit the notes you intend to hit precisely,” Julian says. “Depending on how fast it is and how great the jump is, it can be quite difficult to do.”

Boogie-woogie and walking bass lines. You hear those too when you hear Fauth.

“I use all of it to some extent,” Fauth says.

The blues/jazz of the 1920s and the 1930s are hiss biggest influences.

“Whether it is blues or gospel or stride piano or jazz or the boogie-woogie stuff, that is all part of what shapes my songs,” Fauth says. “That is just happened to accidentally be what I first started listening to and falling in love with when I was a little kid.”

Julian Fauth at The Boathouse in Victoria Park:

When: Every Friday when Julian is not on tour.

Where: The Boathouse, 57 Jubilee Dr., in Victoria Park.