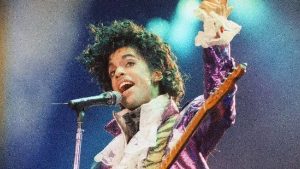 In this Feb. 18, 1985 file photo, Prince performs at the Forum in Inglewood, Calif. A pair of record labels announced Friday, April 28, 2017, that a remastered edition of Prince’s landmark 1984 album â€œPurple Rainâ€ will be released on June 23, 2017. The labels say Prince oversaw the remastering process in 2015 and the â€œPurple Rain Deluxeâ€ will include six previously unreleased songs by the late singer-songwriter, who died one year ago. (AP Photo/Liu Heung Shing, File)

When Prince passed away in April, 2016 of an accidental Fentanyl overdose at the age of 57, the music icon left a treasure trove of new material behind.

Prince’s mixing and recording engineer, George Ian Boxill, was in the process of releasing the tracks on to a six-track EP, titled Deliverance, to mark the one year anniversary of the Purple Rain hitmaker’s death, but Prince’s estate and Paisley Park filed a lawsuit blocking its release.

Now, editors at TMZ.com are reporting that Prince’s estate stopped Deliverance from hitting shelves and streaming services because they want the music to feature in a reality show featuring Prince’s family.

The programme will apparently centre on how life has changed for them since the singer’s untimely death.

TMZ also reports that production of the show is in the early stages right now, and no broadcasting deal has yet been made.

Deliverance was due to be released on 21 April, which was exactly a year after Prince died. Boxill completed arrangements on the six new tracks, finished the production and mixed the songs, which were recorded between 2006 and 2008.

Prince’s estate had been awarded a restraining order to stop the album’s release and ordered Boxill to turn over all the recordings, which are estimated to have a value of more than US$75,000, but he’s still fighting this decision.

A hearing will take place before the restraining order is due to expire on 3 May.