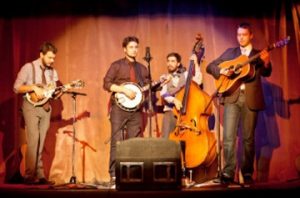 KITCHENER — Now entering its 16th year, the Registry Theatre in downtown Kitchener has become a jewel in the rich arts scene of the city, a small and intimate space that has featured all genres of music and performance.

“Overall, our best season was last season,” said programming director, Lawrence McNaught. “People have come to know the quality of the music.

“We had a very strong 15th season last year, so many great artists, so it was hard to top it. But I think we did top it.”

One Night Only: Live at the Registry is what McNaught calls “our most eclectic series,” because of its variety of genres. It starts with guitarist Kevin Ramessar and his group Oct. 14 and 15. Ramessar has been dividing his time, performing at both the Stratford Festival and on Broadway in “Beautiful: The Carole King Musical.”

McNaught said that despite the guitarist’s heavy schedule, he always makes time for a Registry concert. He will be performing the music of Joni Mitchell.

A highlight of the One Night Only series happens Nov. 25 when two jazz greats come together, Gene DiNovi formerly of the Benny Goodman Orchestra and Dave Young, Oscar Peterson’s long time bassist.

One of the world’s most admired Celtic guitarists, Tony McManus, returns Feb. 3. April 7, the Slocan Ramblers perform a new generation of bluegrass music.

The Classics at the Registry series celebrates its 10th anniversary with performances by local musicians, including Nota Bene Baroque Players, Sept. 18, Nov. 6 and Feb. 5. And in celebration of this anniversary year, a new quartet has been formed by cellist, Paul Pulford.

“They call it The Registry Quartet,” said McNaught, obviously tickled by the compliment.

He noted that of all the music presented at the Registry, the Folk Series has always drawn the biggest crowds. On Oct. 29 the series launches with Jez Lowe, one of England’s most celebrated singer/songwriters.

McNaught said Lowe is on a short tour in Canada and was willing to make a stop at the Registry.

Aside from all the music, new this year will be a comedy series.

“We’re partnering with the KW Comedy Festival,” he said.

In the genre of comedy is “Old Men Dancing” on May 4, “a bunch of old guys, not trained dancers who work with choreographers,” he said. “They’re hilarious.”

Dec. 15 and 16 is a perennial favourite, Big Band Theory, for their annual Christmas concert and fundraiser for the Books for Kids program.

McNaught said that despite the heavy programming, he is careful to leave space for community groups such as the JM Drama Youth Ensemble, MT Space Multicultural Theatre and VOC Silent Film Harmonic. McNaught said it’s important for the community to feel ownership of this facility.

June 2 and 3 the Registry welcomes guest artists Don and Jeff Breithaupt, two singer/songwriters with international reputations, but roots in Waterloo Region. The musicians did not grow up locally, but they are aware of their family background and the importance to the early history of the region.

McNaught was surprised when they accepted his offer to perform in the little theatre and he hopes to expand on the programming for the night.

“We might have a photo exhibit, it’ll be a community project,” he said.

In early February, the Registry will once again partner with the Jazz Room for the Winter Jazz Festival, this time with an expanded program given the success of 2016’s concerts.