With nominations for three Juno’s, the Polaris Prize, The CBC “Heart Of Gold” and six solo albums to his credit, Danny Michel is unquestionably one of Canada’s finest songwriters.His thoughtful lyrics & earnest performances have earned him a devoted fan base. A musical chameleon, able to slip into many genres with ease. An adventurous & fearless artist. A master at striking the right balance between unpredictability and meeting expectations, leaving you wanting more as soon as it’s over.

He gained publicity in 2008 for making the tracks of his hit single “Feather, Fur & Fin” available for his fans to remix and then posting their submissions on his website. In 2011 he relocated to Belize. There he founded the “Danny Michel Ocean Academy Fund” to help raise scholarships for small non-profit community high school. To date he’s raised over $70,000.00 for the school and volunteers there when he can. 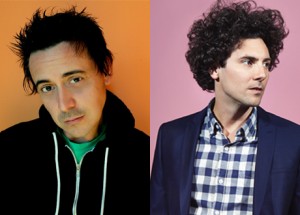 Later he tracked down one of his favorite bands; The Garifuna Collective, a unique Afro-Amerindian cultural group and convinced them they should make an album together. That album (“Black Birds Are Dancing Over Me”) was quoted as “One of the finest musical works of our time” by Billboards Larry Leblanc. The album landed him a 3rd JUNO nomination (this time in the world music category) and a sold out summer tour of North America with The Garifuna Collective as his band.

Past critics have praised Danny’s lyrics for having “something to say” without coming off preachy. Topics range from the environment (“Feather, Fur & Fin”) to big questions (“If Gods’ on your side, then who’s on mine”). Others ask “Who’s Gonna Miss You when you’re gone?” a song which explores karma asking “Did you live it right?/did you live it wrong?”.

Listening to Mint Juleps, the fifth album by two-time Juno Award nominee Jeremy Fisher, is like ambling through the long and relaxed dog days of summer. The acoustic-driven collection of 12 songs reunites Fisher with his folk-drenched musical roots and is a veritable throwback to the golden era of the singer-songwriter. Call him a renaissance man, or even a modern-day folk hero. Whatever you call him, it’s clear that Jeremy Fisher is bringing back the nearly forgotten art of making a great record from start to finish, and forging a career path that is built to endure.