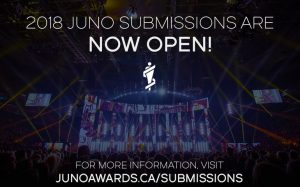 CARAS has also introduced the following changes this year:

Comedy Album of the Year

Francophone Album of the Year

Rap Recording of the Year

Album Artwork of the Year

Eligible musicians are Canadian Citizens, which are defined by CARAS to be that where a majority of the group members hold Canadian birth certificates, passports or are Canadian Permanent Resident(s) with residency in Canada during the last six months of the eligibility period.

Voting Process by the Numbers

330 Judges are responsible for listening to each of the submissions and voting for the best product in the genre. The judges change each year and are spread out in different facets of the music industry and different regions throughout Canada.

50 Nominating & Voting Committee Members maintain the integrity of the JUNO Awards. It is their responsibility to monitor any changes within the industry as it relates to the awards. The committee brings any necessary modifications to the attention of the Board of Directors.

190+ Music Advisory Committee Members are responsible for ensuring that each of the submissions in their particular genre meets the required qualification for the JUNO Awards. Each category has an associated advisory committee.

For a complete list of JUNO Awards categories, eligibility rules, and voting criteria, visitwww.junoawards.ca/submissions and a handy FAQ can be found here.

Those considering putting their hat in the ring should note that one can save up to 40% on submissions by signing up as a CARAS Academy Delegate at www.junoawards.ca/join.